This would be a light post, akin to what I used to write when I was younger (and to be honest, had missed writing them here) but I like to bring home funny stories of the things that happened to entertain my mother and my adventures, experiences where I go out with high hopes and no expectations, are often the best stories to tell. This is not an in depth writing on my experience but simply a break for myself and I hope for you as well.

Recently my sisters and I sat for our SPM Malay oral test (ULKCP BM or Ujian Lisan Khusus Calon Persendirian Bahasa Melayu) at a public secondary school. The only oral tests I remember sitting was for hafazan (memorising Quran and du’as) and qiraat (reading Quran) exams back at primary school so I have no idea of what was to come. I tumbled into cycles of panic and equanimity. The research I conducted was of little help as there was not much help available on the internet for someone who homeschool as I do and don’t even know the basic format of what to do.

And as always, this adventure is no less rich with unexpected experiences and lessons learned.

I walked into the exam room expecting to find myself getting into trouble with some of the more specific words in my less developed Malay lexicon – and I did. I have gotten used to having a wide range of words to choose from when speaking in our mixed brew of Malay and English at home (with a sprinkle of random foreign words just for the fun of it), restricting myself to one language can leave me at lost for words from time to time and it is much more apparent in Malay than in English. And during the oral exam, I was restricted to a high register, Melayu Baku, and although I tried to think in Melayu Baku, I also had to filter everything that comes out of my brain, just in case.

But to our greatest surprise (and my mother’s mirth), the word that both my sister, Aeshah, and I got stuck with was mangosteen or ‘manggis’ as we call it in Malay. Never did I imagine that I would remember ‘buoh smete’ (mangosteen in the Terengganu dialect) over ‘manggis’. And we were taking the tests simultaneously in different rooms so there was a chance that we got stuck at the same time. However since we both have experiences with interviews and speaking on stage, we both discarded our attempts and looked for a different word instead. 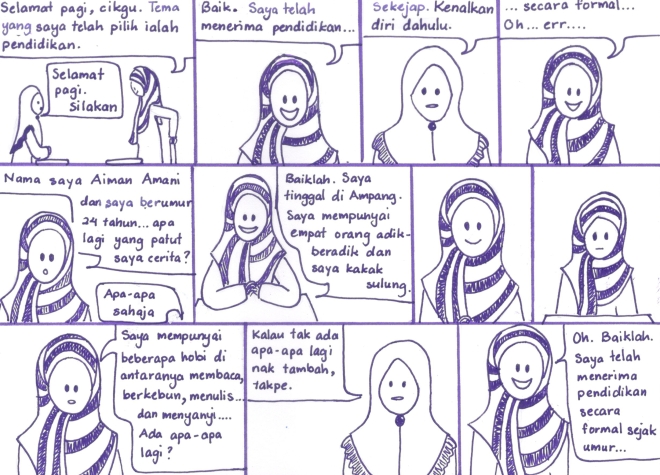 So here’s a funny story: I spent my ten minutes of preparation constructing the backbone of my response, developing each of their content and sculpting my opening paragraph. The instruction was for me to describe the education I received. I was going to bring up how my education began informally the moment I was born, making a point on how education is not simply restricted to what is generally described as schooling.

I thought that my opening line would bring a good first impression but instead, I forgot to introduce myself and that was definitely the most difficult part of the exam for me. Being asked to introduce myself feels like being told to say something in a different language, there’s just so much that could be said and yet nothing feels relevant or appropriate. It is the one thing I really should have prepared before going in and it really threw me off. I left the entire informal education angle up until the end of my discussion as if it was a minor sub-topic.

Coffee… my dearest friend and companion. Coffee was my wingman when I was nervous for the late night radio interview “When The Night Falls” several years back with DJ Nizal Mohamed. I was just there, in the moment, having this conversation with my father’s friend. It didn’t matter that there are people listening in or that we have bulky equipment all around us. I was an open book; I voiced out opinions, which were so close to my heart, even my parents had never heard of them.

I couldn’t sleep the night before my oral exam and when I did, I had nightmares of receiving odd questions which simply have no right or wrong answer. I woke up sleepy with my mind wandering in and out of my head and wondered if coffee would help wake me up a little. I was only worried about coffee making me say things that I wouldn’t feel comfortable otherwise – which was exactly the problem I had, just not in the way I expected.

My mother trained me for public speaking since my primary school days and she had drilled into my head that I should limit my fillers like the ‘err’s and ‘uhm’s. I am not perfect but I believe that I could limit them most of the time or use them in a way that doesn’t seem too off-putting.

However, with the introduction mishap and my constant worry of how formal my language was, I was pausing a lot and I peppered my ‘err’s all throughout the session. Even as I said them, I told myself not to… which distracted me from thinking of my response and made me pause with another ‘err’. In the end, I simply threw the whole effort out of the window so I could focus on saying things that actually mean something.

But despite all of these fun stuff, I think I did alright. I would have liked to do better and had I known what I was walking into, I would perhaps have done a little better.

I enjoyed our group test as well as all four of us have our own unique ideas and approaches to most of the questions given and it was just fun to pretend like we’re making a pitch of some sort. A lot of my nervousness seeped out of me as I listened to others’ views. Our planning wasn’t as in-depth as I would have liked it to be but we were only given ten minutes and I think all of us winged it pretty well. My sister, Anisah, was assigned to the same group as I was and when we gave our initial presentation, everyone had accidentally presented all of the points we discussed before Anisah had a chance to say. Without missing a beat, she summed up all that we had discussed into a neat conclusion with a note on what we should do moving forward and I was really impressed by that.

Whatever the results (though I dearly hope that all three of us passed), it was an experience I would treasure and the events that took place would probably stay with me for a long time. And I probably would never be able to eat a mangosteen in peace ever again.

One thought on “Oral Exam Adventure”