On the evening of 14th of June, my mother received a call from her cousin telling that my great grandfather, Mohd. Yaacob bin Abdullah (or his Chinese name, Tung Foo Piew), son of Abdullah Al-Yunani was admitted to the Kuala Terengganu Specialist Hospital. My father decided to leave for Terengganu early the next morning. However, we received another phone call half an hour later and my mom’s cousin told my mother that Appa had passed away. The news was a real shock to us because although Appa was over 95 years old, he was healthy and active. 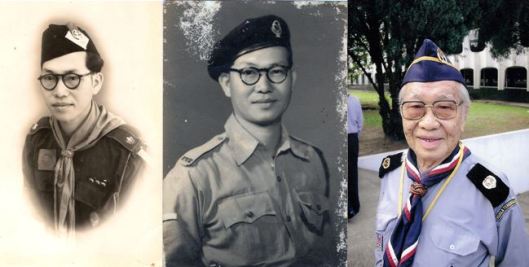 Appa, scouting through the ages…

We left for Terengganu that night after Maghrib and arrived at his house at around 1:30 am. He was buried later in the morning at about 10 am at the Perkuburan Tok Pelam.

My great grandfather was a really fun and jolly man. Everytime we visited him, he would tease my little brother calling him Muhammad Ali, the boxer. He loved ice-cream and chocolate. My father would always bring him ice-cream and Appa would eat his with relish.

And he would welcome us to his little library and sometimes pulled out the books he had recently bought that he knew we would love. He had an amazing memory despite his age.

The last time we visited him, he took out a book on martial arts for my brother and a book on Astronomy for me. He could remember all of the books I had borrowed, sometimes with their complete titles. And he had given me a few books too, with lovely long notes on the first pages, written in ‘old Malay’. I was always thrilled everytime he gave me a book, particularly because I knew that the special note would be waiting for me.

Appa was a wonderful man and we would all miss him a lot. May Allah bless his soul.

Higher education minister, Datuk Seri Mohamed Khaled Nordin confirmed in a press statement that The National Higher Education Corporate Fund (PTPTN) had frozen its loans to students studying in Universiti Selangor (Unisel). So it seems that the protesters of ‘Occupy Dataran’, who asked for the abolishment of PTPTN, had won, even if it’s in a small scale as a start.

One would think that the students and the opposition leaders who support their protest would now be on cloud nine, rejoicing on the fruits of their labour. But instead, PKR’s director of strategy, Rafizi Ramli, made a press statement saying that “Khaled (Datuk Seri Mohamed Khaled Nordin) should resign from his post if he had instructed the PTPTN freeze on Unisel’s students”.  Pretty baffling indeed, since for the opposition leaders especially PKR,  PTPTN is nothing but a burden that caused students to be in debt even before getting their first salary.

Students from the ‘Occupy Dataran’ protest.

Unisel is a Selangor-owned university which is under the opposition’s rule. Since PKR is openly criticising the government for implementing PTPTN as a tool to help students financing their studies, so why are they complaining when PTPTN is not offered to PKR’s Selangor-owned university? Isn’t it what they had been fighting for? The opposition should carry on with their plans to offer free tertiary education in Unisel. After all, they are promising free tertiary education to all Malaysians if they win the 13th General Election (PRU 13) as they do not believe in troubling the students to pay back their loan as the current government does today. Indeed only just a few days ago the opposition leader Dato’ Seri Anwar Ibrahim told his audiences in Permatang Pauh not to pay their PTPTN loan,

“No need to pay, let them sue if they want! However, you must pay other loans, no need for PTPTN.”

Of course in slamming PTPTN as something like a ‘loan shark’, they simply do not mention the fact that if a student obtains good grades throughout her or his studies, she or he can apply for the loan to be turned into a scholarship thus there is no need to pay the PTPTN.

That leaves us with the question, are the oppositions really serious with their promise of a free tertiary education? If so, why are they so furious when PTPTN had frozen its loans to students studying in Unisel? If they are at lost as of how to finance Unisel without the fees paid by their students then how are going to finance all the (very much) bigger universities in the country if free tertiary education becomes a reality? Or is free tertiary education is just another not to be fulfilled promise as lots of other promises given to the people of Selangor before they win the state in the 12th General Election in 2008? After all they can just easily blame the Barisan Nasional leaders for draining all money and putting Malaysia in a bankrupt state.

I was shocked to read an article on Harakah Daily dated May 31, 2012 entitled, ‘Mapim: Najib layak digelar bapa liberal Malaysia’ or ‘Mapim: Najib is fit to be called the father of Liberalism in Malaysia’ for being on stage together with some members of a K-Pop group at the National Youth Day Celebration last week. Mapim or the Malaysian Consultative Council of Islamic Organizations accused the Malaysian Prime Minister, Dato’ Sri Mohd Najib bin Tun Abdul Razak of ‘endorsing’ the idea of Pluralism and Liberalism in Malaysia and suggested that he should be called ‘Ketua Liberalis Malaysia’ or The Head of Malaysian Liberalist because the K-Pop girls was dressed in shorts and top tanks.

A liberalist may has her or his own ideas or doctrine about Islam, believing that the traditional Islam creates a blockade that prevent people from thinking ‘liberally’. So, it matters ‘aqidah’ and not only wrong doing or ‘maksiat’. An example of a liberalist is Irshad Manji, a Canadian ‘lesbian Muslim’ who believes that praying 5 times a day is totally man-made thus serving no purpose and Allah loves the homosexuals as they are ‘born that way’. Another popular liberalist is Salman Rushdi.

As for a pluralist, she or he believes that all religions are true as all paths of all religions shall lead to the same end as quoted by Dato’ Seri Anwar Ibrahim on March 18, 2010 at the London School of Economics. Again Pluralism in Islam goes back to ‘aqidah’, Pluralist may perform all their duties and responsibilities as Muslims but by believing that every body actually pray to the same god they are pluralists. That comes back to the issue of using the word ‘Allah’ by other religions in Malaysia. In this case it is clear that Dato’ Seri Anwar Ibrahim and not Dato’ Sri Najib who fights to let all other religion to use the word ‘Allah’ to refer to their their gods.

Seeing the matter on this light, I cannot understand the ‘liberalism’ idea that was said to be spread and encouraged during the event. It is true that K-Pop members were not properly dressed and Najib shouldn’t have been on the same stage with them and the government should set a proper dresscode for such events but it is very wrong to use the incident to accused the PM ‘spreading liberal Islam’ unless if the PM made a statement that he wants to reform the Muslims’ dress code to the ones worn by the K-Pop groups. So, what happened was wrong doing and nothing to do with ‘aqidah’.

Speaking about the Himpunan Sejuta Belia, it is very funny that only the unIslamic  and the non beneficial programs such as the drag race and K-Pop were featured in the opposition medias but there was almost no words about the fact there were many educational activities such as ‘Young Entrepreneur’, ‘Education Fair’ and even Islamic activities like ‘Kolokium Tokoh Belia Islam’, Solat Hajat, Majlis Tahlil, Doa Selamat and Himpunan Pendakwah Muda’ marked under ‘aktiviti modal insan’ which was held during the event. Why did they only specifically highlighted the bad part of the event and did not even mention the beneficial activities. Again, I ask, is this another of their ‘political agenda’?

I do not ‘endorse’ those unhealthy culture and I call for UMNO to change and look into better entertainment approaches but I want to slam those who called the PM ‘Ketua Liberalis Malaysia’ and for writing:

Liberalist and pluralist are serious offences in Islam and they could be consider as murtad or apostate. So calling a Muslim PM as ‘Ketua Liberalis Malaysia is really uncalled for and may suggest a very bad intention to tarnish not only Dato’ Sri Najib but also UMNO and Malaysia as an Islamic country.