It is now no longer a problem for anybody (especially florists) to obtain fresh flowers of any colour they wished for. There is now a technique of dyeing white flowers to other colours; be it pink, blue, black, green or purple.

I remember conducting an experiment when I was in Primary 1. We placed white flowers into a beaker of diluted red food colouring. After a while, the flowers had tints of red on the tips of their petals. Later, we saw that almost the whole flowers had turned red. We then cut the stalks of the flowers and found out that they were red too. We even ‘created’ a mixed-coloured flowers by dividing  the stems and place them in separate jars of dye.

Last Sunday, I came home from Kak Tasneem’s kenduri (click here to learn more about kenduri’ and click here to read about Kak Tasneem’s kenduri) with a bouquet of blue chrysanthemum for Nenek (my grandmother). I showed the flowers to nenek and she stared at them in wonder. She was really amazed by the flowers! She told me that she had never seen blue chrysanthemums before.

Blue chrysanthemums in a vase

Anyway we later found out that the chrysanthemums were actually dyed! As soon as we reached home, I arranged the flowers in a transparent vase and to my surprise, the water turned into a faint shade of blue after 5 minutes. Then, the eczema on my hands became very itchy and rashes appeared as I am allergic to some chemicals like artificial colourings. After replacing the water for four times within 41 hours, the colour of the chrysanthemums are no longer a striking blue but had toned down into a softer shade. Nevertheless, the water were still blue everytime I changed it. 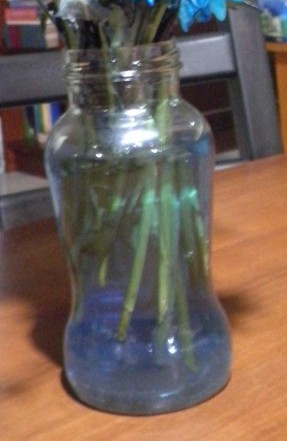 It is amazing how we can ‘colour’ our flowers into any colours of our choice. It would definitely  be a fun project for kids to enjoy.

Note: All of the flowers in these photos had their colours toned down to a softer blue. Click here to see the original colours of the flowers.

These are the photos of the beautiful rainbow that I snapped the other day… enjoy 😀 (please click on the photos for a larger view at them).

Do you remember when I told you that the second rainbow was no longer visible when I took out the camera? I was actually wrong! Observe the photo below. It actually has another very faint rainbow above it.

Can you see the second rainbow?

If you cannot find it, have no fear! I’ve edited the photo a little to allow you to see the second rainbow. I had increased the contrast of this photo below by 40% and decrease the brightness by 30%. Look at the photo below.

Can you see the second rainbow now?

I did not realise that the second rainbow was caught on this photograph until just now when I wanted to add it to my blog. Here are  two more photos of the rainbow for you to enjoy.

The second rainbow is also visible on this photo only that it is much, much fainter.

The last photo that I snapped. Even the bright rainbow is fading. I do not think that the other rainbow is still visible on this one though.

My sisters came running from upstairs yelling, “Rainbow! Rainbow!“. My brother and I excitedly rushed with them out of the front door searching for a rainbow but we found nothing. Actually our father just called to tell us about the rainbow. Thinking that we might get a better view from our bedroom windows, we climbed upstairs but again no rainbow can be seen.

Not willing to give up, we ran past the kitchen (where my mother was anxiously screaming with the fear of us getting burnt) and went straight outside. This time, we’ve been rewarded with not one but two rainbows! One of them is unusually bright that we momentarily gaped in awe.

Hunting for a camera, again we ran past mum since the kitchen is the only entrance to the backyard. Unable to find dad’s new camera (Olympus FE4030), I grabbed dad’s Sony handycam and made my way outside. The second rainbow had now vanished from sight but the first is still amazingly bright. I snapped quite a number of photos and a will show them in my later post

Later, we found out that dad’s Olympus camera was actually with him -click here to view dad’s photos using his Olympus-It was in fact a perfect semi-circle rainbow; like the ones we’ve seen at the Niagara Falls.