I think it is hardly necessary for me to explain to the Muslims why Anwar’s statement, “Sayyidina Ali the first Caliph” is wrong; for Sayyidina Ali r.a. is actually the fourth caliph, after Sayyidina Abu Bakr, Sayyidina Umar and Sayyidina Uthman.

Coming from the mouth of Anwar Ibrahim, “the renowned speaker on the subjects of democracy, freedom, governance, Islam” (quoting from Wikipedia), this uncorrected ‘mistake’ is far beyond mind-boggling. Even insane feels like an understatement.

The most baffling part of the whole thing is that even the audience didn’t question and seem to accept Anwar’s statement.

However, as it had been shown in the video, the Shiites or Syiahs, believe that Sayyidina Ali is the only true caliph as he was the nephew of the Prophet Muhammad but this devious belief has been banned in Malaysia as has been decided by the Fatwa Committee of the National Council for Islamic Religious Affairs Malaysia. Quoting from the e-fatwa website:

The 40th Special Muzakarah (Conference) of the Fatwa Committee of the National Council for Islamic Religious Affairs Malaysia held on 5th May 1996 has discussed Shi’ism in Malaysia. The Conference decided to:1. Agree with the decision of the Fatwa Committee Muzakarah (Conference) held on 24th-25th September 1984 [Paper No. 2/8/84, Article 4.2. (2)] concerning Shi’ism that decided as follows:
“After discussing and deliberating on this working paper, the Committee has decided that only the Zaidiyyah and Jaafariyyah Shi’ite sects are accepted to be practiced in Malaysia” is abolished.
2. Decided that Muslims in Malaysia must only follow the teachings of Islam based on the doctrine of the Ahl al-Sunnah wa al-Jama’ah on creed, religious laws and ethics.

Could it be that Anwar intentionally made this ‘mistake’?
After all, PAS, another member from the unregistered oppositional coalition, Pakatan Rakyat, has often voiced their support for Syiah. 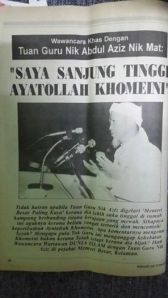 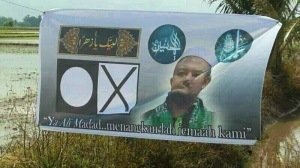 Q: So what should Pakatan Rakyat do with enactments such as Selangor Non-Islamic Religions (Control of Propagation Among Muslims) Enactment 1988, which seems to be the core problem in this issue?

A: The enactment has an attachment and the problem is with that. The enactment is for the protection of Muslims from efforts to proselytise but the attachment in terms of the words is generally excessive. I was in Penang speaking to religious scholars when I told them how do you explain a resident on Jalan Masjid who uses Jalan Masjid on his or her address?

So they immediately know the problem. I think this must be addressed. Unlike immediately responding to demands of non-Muslims groups, you must also know about the incessant propaganda among Muslims that has led to some of them to believe that they are under siege.

I can’t believe that of all people, the person who claims that he is the best person to become the Prime Minister of Malaysia and who is now trying to become the Menteri Besar of Selangor, would make such a silly statement regarding an enactment made in none other than Selangor itself.

The Section 9 of the Non-Islamic Religions Enactment 1988 says that the words (including Allah) cannot be used to express or describe anything of or pertaining to any non-Islamic religion. Quoting from the e-Syariah website:

A person commits an offence if he–

uses any of the words listed in Part I of the Schedule, or any of its derivatives or variations, to express or describe any fact, belief, idea, concept, act, activity, matter, or thing of or pertaining to any non-Islamic religion.

When a resident on Jalan Masjid uses the word masjid on his address, he uses it to describe a location. He doesn’t use it to express something pertaining to a non-Islamic religion. Just like in the ‘state songs argument’, where the person would say that it would then be impossible for a non-Muslim to sing the state songs with ‘Allah’ in the lyrics, this argument is baseless. This is due to the fact that Allah mentioned in the lyrics is referring to the Islamic God. It is not subjected to the singing individual’s religion since Islam is the religion of the federation, as had been stated in the Article 3(1) of the Federal Constitution.

Not surprisingly, Anwar repeated the argument in the same interview.

Q: Like in the Selangor case, the Selangor state anthem has the word ‘Allah’… so does that mean that non-Muslims should not sing the anthem?

A: That is what has been raised. The point taken or the position of the Selangor religious department that is the law as it stands. But then the appendix to the law and manner of action is missing. So you have to see whether you should prosecute a person who puts down his address as Jalan Masjid. So far that has not happened. But that is the flaw in the legislation.

As I have copied from the e-syariah website, the Section 9 of the enactment clearly states that a person commits offense by using the words to express or describe anything of or pertaining to any non-Islamic religion. Anwar says that “the flaw is in the legislation”—it is not; the flaw is in those who innocently or not-so-innocently misinterpret the enactment.

Do your homework, get back to the facts, brother.

And this is exactly why we must never simply rely on the word of mouth (or media).