From left: Me, Anisah, Ahmad Ali, Aunty Farah and Aeshah

When my father was invited to the TV Al-Hijrah studio for another appearance on a segment of their morning show, ‘Assalamualaikum’, he asked if any of us would like to come with him. Not surprisingly, Ahmad Ali (and I suppose my sister Aeshah too, although she would not show it) went head over heels with excitement and anticipation.

Ahmad Ali and Aeshah Adlina at the main entrance

Arriving at their headquarters, you could see the excitement written all over the face of the young ones. Ahmad Ali gazed around with a childish wonderment and glee, with his grin stretched from ear to ear. He even had the rare opportunity to take a photo inside the studio before the program was aired!

Inside the recording studio

We were in the ‘meeting room’ while waiting for our father’s turn and it was there where we first met Aunty Farah Adeeba and Abang Amin Idris, the hosts for the day’s show. Aunty Farah was very charming and amiable and since I’ve often teased Ali that Abang Amin is the ‘future Ahmad Ali’ by their similar expressive body language, it amused me to note that he even ‘posed’ like Ahmad Ali! 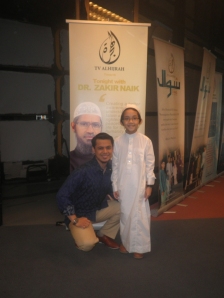 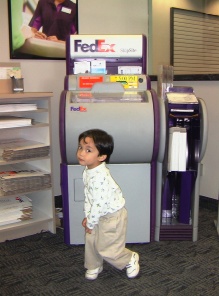 Ahmad Ali posing in front of a FedEx Shipsite

This reminds me of the time when I myself had felt the same thrill as I walked into Karangkraf’s headquarters for a photo session. I was featured as the cover-girl on the distinguished children’s magazine, Dewan Pelajar December 2006 issue. I can still remember the disappointment that I felt as I walked into the Karangkraf office. I was expecting a large and ‘exciting’ studio like the ones I’ve been watching on ‘Kidsongs’, quite forgetting that I was going to a photography studio and not a television studio!

Cover of the December, 2006 issue of the Dewan Pelajar magazine

It is funny to think that when I actually walked into a real TV studio, I have lost that excitement that I used to have before. It would be really fun if I could be at the studio when I was younger… like my little brother, Ahmad Ali.

One thought on “A Visit To A Real TV Studio!”