Tok Cu Bee (left), Aunty Emy (middle) and me enjoying our time together.

Guess what happened this morning? I met Aunty Emy and Tok Cu Bee! Yes, that’s right… seven bloggers (dad, Aeshah, Anisah, Ali, Aunty Emy a.k.a. Royaltlady, Tok Cu Bee a.k.a. Bebee and me) met at Shukur’s Nasi Dagang Stall. Not that we met coincidentally (like how Uncle Azahar met me) but we had planned this meeting the night before. There were also two non-bloggers at the unofficial bloggers meeting; mum and Uncle Syed Mohd Zaid who works as a MAS pilot. 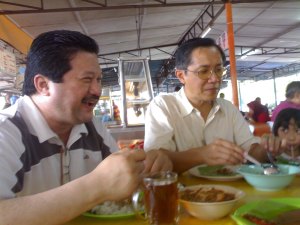 Aunty Emy is actually our relative and so is Tok Cu Bee. Aunty Emy and Tok Cu Bee called themselves ‘Grandma Bloggers’ as they both are grandmothers. Tok Cu Bee told us that she was inspired by Awang Goneng to start her blog (La Vie En Rose) and so was Aunty Emy (Royaltlady). Aunty Emy started hers on her birthday in December 2007. By the way, Aunty Emy was Uncle Azahar’s classmate in year 6 many years ago. Uncle Azahar is another blogger friend of ours whose wonderful blog is Nature Lover.

As we enjoyed our breakfast, we talked about all sorts of things. Uncle Syed explained how did the FedEx plane crashed in Tokyo a few months ago. There was strong wind at the time the plane was landing and the wind was blowing from the sides of the plane. As the plane tried to land, it bounced back and one of the wings grazed against the runway before bursting into a fireball which killed both the pilot and the co-pilot.

At about eleven, we decided to break up after spending more than two hours at the stall. I really enjoyed the meeting and I hope that there will be more bloggers meetings; perhaps with even more bloggers to make it even more exciting. Aunty Emy, Tok Cu Bee and Uncle Syed were really wonderful and I am looking forward to see them again; as we say in Trengganuspeak, ‘Dok sabor doh nok ttemu mata lagi!’

Can you guess what did I have for dinner last night? CHILI CON CARNE! And how I love the taste and the aroma of Chili Con Carne eaten with French loaf and butter… especially when it was about a month since mum last cooked Chili Con Carne. 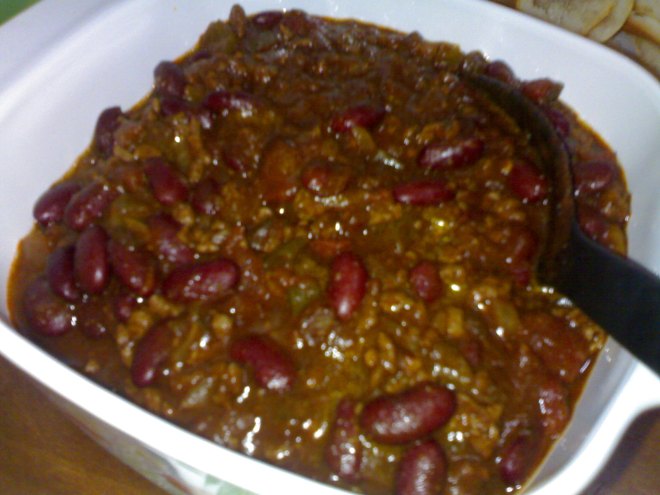 Chili Con Carne is a Texan-Mexican food and it is very popular among the Texan as well as the Mexican. In fact both the Texan and Mexican claim that this scrumptious food originated from their native lands!

Chili Con Carne can be eaten with French loaf, tortilla, plain crackers or add it to your hot dog and it’ll turn your plain hot dog to a Chili dog! Anyway, the Chili in the Malaysian A&W Chili dog does not taste like Texan Chili at all. 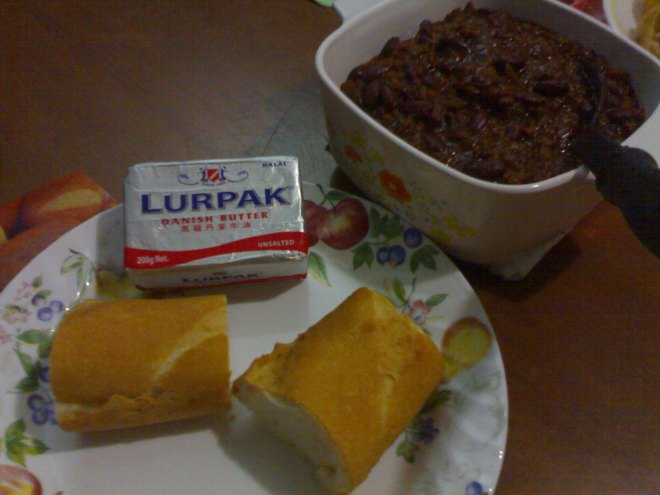 We ate our chili with French loaf and unsalted Lurpak butter (Mmmm....)

Chili Con Carne is also delicious that we can enjoy it in so many ways. My mom tried dipping some left over banana fritters (or in Malay we can eat ‘pisang goreng’) in her Chili Con Carne and she said that it tasted good! In fact maybe we can even enjoy Chili Con Carne with naan, prata or even chapatti ;). 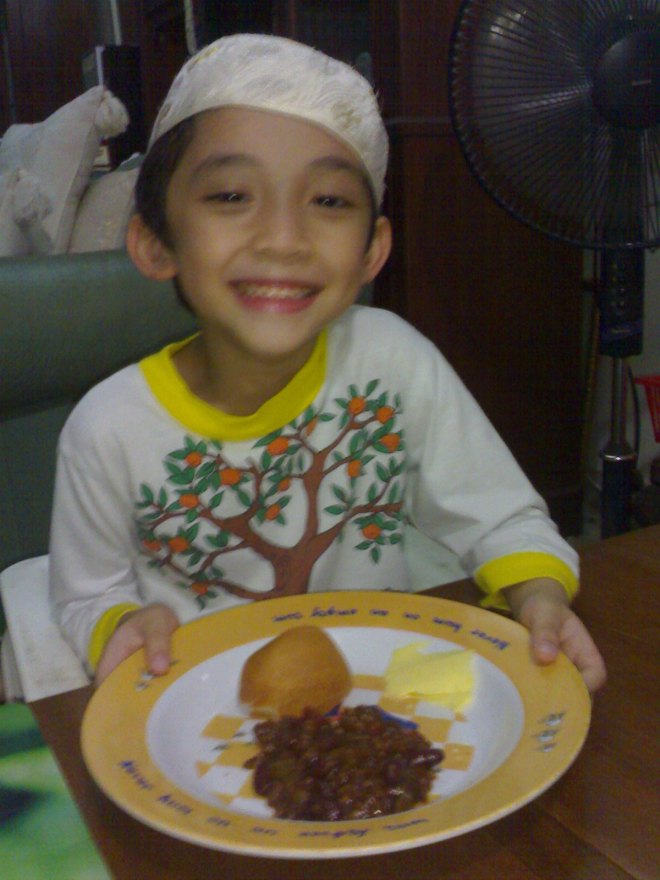 Ahmad Ali (and everyone else too) loooooooooooooves Chili Con Carne!

Like Loading...
Every Friday, my siblings and I went to practice my silat lessons at Zaytuna Elementery School (Sekolah Sri Kenanga). We learn Silat Seni Gayung Malaysia with four other students of the school too. A few months ago, I had just realized that the miracle tree (moringa oleifera) beside the school building and as I promised May 13, GreenMalay and everyone else… I had uploaded pictures taken from my handphone after yesterday’s practice. 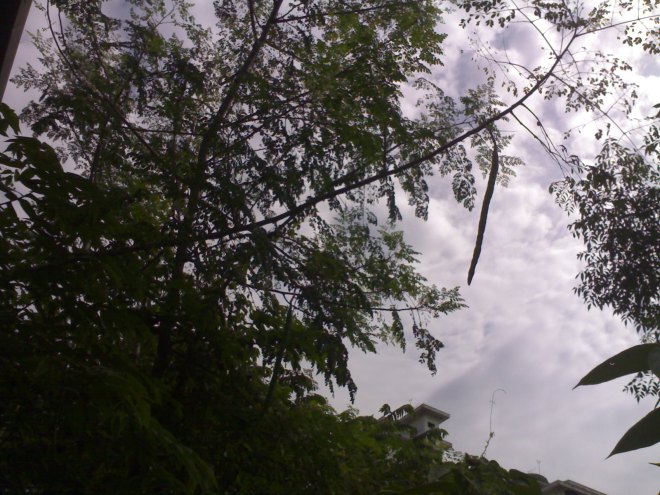 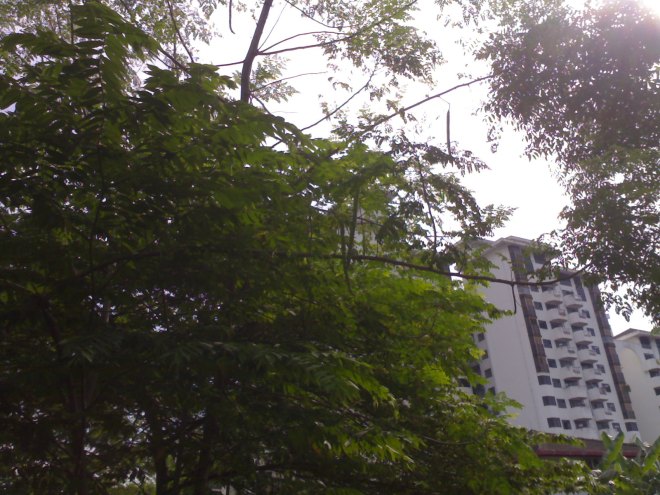 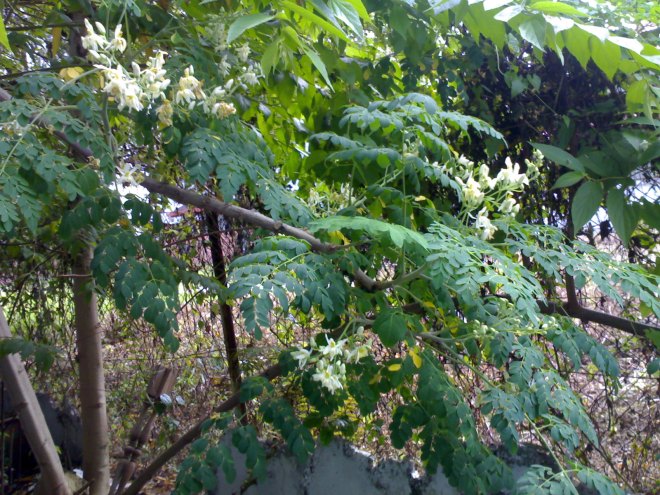 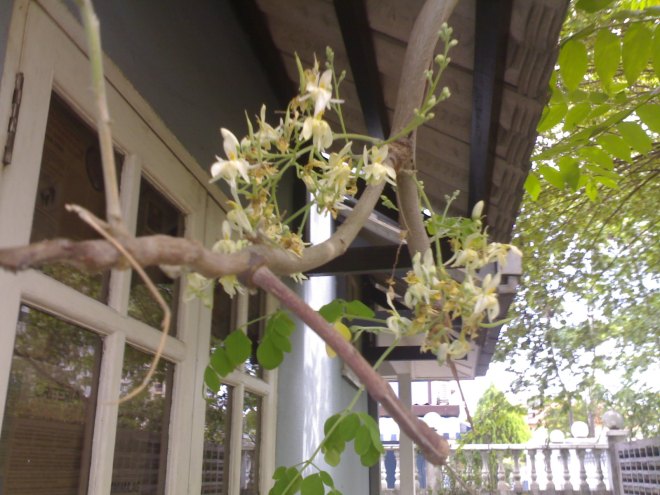 Another beautiful photo of its flowers 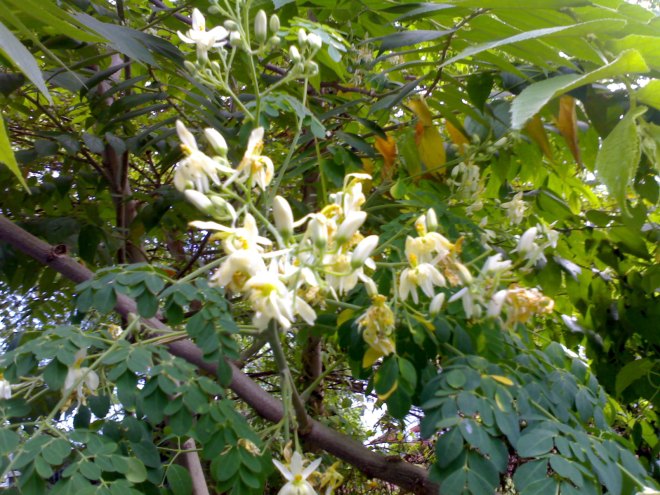 A close up view of its flowers and leaves

My little sister, Anisah (in her silat uniform) holding one of the many fruits.

Those pictures are beautiful aren’t they?

Mum and dad showed to me this piece of news from CNN online:

(CNN) — Remember the dire predictions surrounding the “millennium bug?” The doom-and-gloom scenarios bandied about by security analysts on how computers could act when their clocks turned to January 1, 2000?

(Computer users will not know that Conficker.c has infected their machine.)

Well, researchers are hoping that a potential April Fools’ time bomb — the Conficker.c that is supposed to hit computers on April 1 — turns out to be equally unfounded.
But realizing that hope alone is not a prudent option, here is a primer on the worm so you can adequately prepare yourself — and your computer.
What is Conficker.c and what do analysts fear it may do?
Conficker.c is a worm, a malicious program thought to have already infected between 5 million and 10 million computers.
Those infections haven’t spawned many symptoms, but on April 1 a master computer is scheduled to gain control of these zombie machines, said Don DeBolt, director of threat research for CA, a New York-based IT and software company.
What happens on April Fools’ Day is anyone’s guess.
The program could delete all of the files on a person’s computer, use zombie PCs — those controlled by a master — to overwhelm and shut down Web sites or monitor a person’s keyboard strokes to collect private information like passwords or bank account information, experts said.
More likely, though, said DeBolt, the virus may try to get computer users to buy fake software or spend money on other phony products.
Experts said computer hackers largely have moved away from showboating and causing random trouble. They now usually try to make money off their viral programs.

Watch more on the worm »
How does the Conficker.c work?
Conficker.c imbeds itself deep in the computer where it is difficult to track. The program, for instance, stops Windows from conducting automatic updates that could prevent it from causing damage.
The program’s code is also written to evolve over time and its author appears to be making updates to thwart attempts to neuter the worm.
Who wrote the program?
It’s unclear who wrote the program, but anti-work researchers — a group calling itself the Conficker Cabal — are looking for clues.
First, they know that some recent programs have come from Eastern European countries outside the jurisdiction of the European Union, said Patrick Morganelli, senior vice president of technology for Enigma Software.
Worm program authors often hide in those countries to stay out of sight from law enforcement, he said.
In a way, the Conficker Cabal is also looking for the program author’s fingerprints. DeBolt said security researchers are looking through old programs to see if their programming styles are similar to that of Conficker C.
The prospects for catching the program’s author are not good, Morganelli said. “Unless they open their mouth, they’ll never be found,” he said.
So, the most effective counter-assault simply may be damage control.
How can I tell if my computer’s infected?
One quick way to see if your computer has been infected is to see if you have gotten automatic updates from Windows in March. If so, your computer likely is fine, DeBolt said.
Microsoft released a statement saying the company “is actively working with the industry to mitigate the spread of the worm.”
Users who haven’t gotten the latest Windows updates should go to http://safety.live.com if they fear they’re infected, the company’s statement says.
People who use other antivirus software should check to make sure they’ve received the latest updates, which also could have been disabled by Conficker.c.
How did the worm evolve?
The first version of Conficker — strain A — was released in late 2008. That version used 250 Web addresses — generated daily by the system — as the means of communication between the master computer and its zombies.
The end goal of the first line was to sell computer users fake antivirus software, said Morganelli.
Computer security experts largely patched that problem by working with the Internet Corporation for Assigned Names and Numbers to disable or buy the problematic URLs, he said.
A second variant, Conficker.b, was released in January and infected millions more machines.
The Conficker, strain C, will generate 50,000 URLs per day instead of just 250 when it becomes active, DeBolt said.
What is being done to fight Conficker?
Members are searching for the malicious software program’s author and for ways to do damage control if he or she can’t be stopped.
They’re motivated in part by a $250,000 bounty from Microsoft.

I can never umderstand why would a person ever create such monstrous things. I suppose surfing the internet now is even more dangerous as it used to be. I hope the person responsible for this could be stop as soon as possible.