The yet to be crushed ginger and cinnamon. On the left is the traditional Malaysian pestle and mortar

There is nothing better than indulging myself to a warm cup of ginger and cinnamon tea after a long day of hard work. Only a whiff of the tea is enough to make me craving for a sip of this wonderful and aromatic tea. The aromatic and spicy flavour of ginger together with the sweet and warm taste of cinnamon blends wonderfully with that unique aroma of tea resulting a drink that is so flavourful and heavenly delicious. And the best part is, not only that the tea is so tasty but it is also loaded with tremendous medicinal benefits!

Cinnamon is known for its ability to improve blood circulation and the effectiveness of insulin which plays a role in lowering blood sugar and bad cholesterol level; while antiviral, anti-fungal, antibacterial, anti-clotting and anti-nausea are some of the many medicinal properties of ginger. And black tea has a good amount of antioxidant too! For a ‘spicier’ taste, I sometimes add some cloves which is an excellent source of manganese to the brew.

The result of the 'crushing' process.

Every once in a while (since I am not that eager to crush the spices), I would prepare the ginger and cinnamon tea for both my mom and I. The process is not that hard actually, but I find grinding cinnamon quite tiring especially to avoid the pieces of cinnamon from ‘jumping’ all over the kitchen. While mom loves her tea the way it is, I prefer mine with a richer taste of milk. Since ginger and cinnamon tea has a unique blend of taste, it goes best without sugar which is all the better for your health!

On Saturday, 26th March, 2011, my family and I attended the Khalifah Dinner & Talk. The talk, titled ‘Do Your Best’, was given by Bro. Idris Tawfiq. Bro. Idris Tawfiq was a Roman Catholic priest before embracing Islam and had served the church for 20 years. In his speech, he told us that as muslims, we should not just look at the things going around us and hoped that someone would come and make things right. Instead, we should all lend our hands and do the best in whatever we do with the aim of making the world a better place to live in. 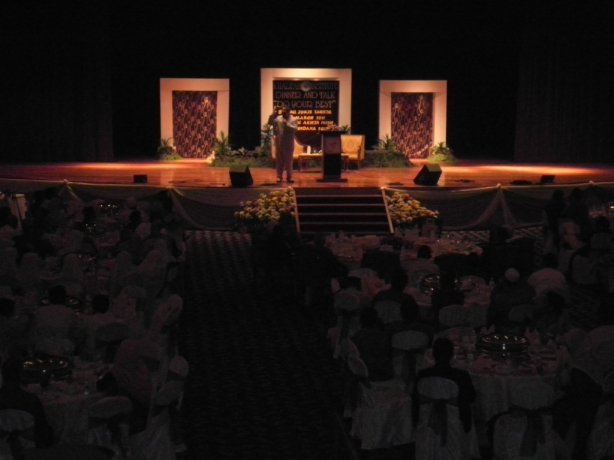 My family and I had the chance of meeting many of our old friends there. There were my friends (Khadijah and Syafiqah) and teachers from Khalifah Model School and my parent’s friends (Aunty Nor, Aunty Alini, etc… ). It was nice to see Aunty Zaharah and Uncle Radzif again and also their son Abdul Fattah, a good friend of mine who I haven’t met for years. Fattah was my classmate through the years I was in Adni. We were close then, not only that we compete with each other for the academic awards but also the one who I can count on in order to complete the notes that I missed during my absents. His younger sisters Umairah and Raudhah was also there.

During the event, I helped to sell books at our little booth. I had been taught ‘the art of retail business’ since I was 10. I helped to operate Khalifah and Muafakat (NGOs) stalls, helped at my grandmother’s bookshop and so on. But my best experience were during the ISNA conferences in the United States.

I had a great time but I miss meeting those wonderful people who I used to meet at Khalifah’s events like Aunty Mislaini, Aunty Atikah, Aunty Habibah, Uncle Nazri, Aunty Tim and some other dear friends of ours. And most of all, I am very sad because we cannot feel the ‘presence’ of the late Bro Muhammad at the event. I know that we should move forward but as what Uncle Awang Goneng always reminds us, we must never forget or bury our past because our past is as precious as our hope.

Both mum and I not only have our birthdays in March but also in the same week. I am 16 this year, Alhamdulillah, and my family members had given me wonderful presents.

Mum gave me a lot of her Australian, American, Canadian and New Zealand stamps wrapped in a lovely silver coloured box. My dad bought me stamps at the stamp fair and an A3 sized document file which I now use to keep my stamps in. My sister Aeshah gave me some Vietnamese stamps featuring dolphins that are missing from my collection and lots of odds and ends that I could use for my craftworks. Anisah gave me a number of her drawings and Ali gave me a hairdryer, a ‘Snoopy’ clock and a watch.

My parents gave me a beautiful birthday card with a picture of a flower drawn by mum (the artist), using soft pastels. Ahmad Ali gave me three birthday cards for he enjoyed card making so much that he couldn’t stop making them… Abang Muhammad sent me a birthday card too, all the way from Chicago together with lots of gorgeous U.S.S.R. stamps.

My mother had a marvellous birthday too. Again, most of her presents were stamps from all of us. I secretly looked through her stamp albums and picked out stamps that I own but is missing from her collection. I’m delighted that she was thrilled to receive the stamps that I gave her. I also gave her some Machin stamps (the British definitive stamps with a picture of Queen Elizabeth’s head – mum simply love them, she has a few pages of those lovely stamps in her stamp album and wishes to own as much as she could). Aeshah gave her stamps too. Anisah gave her an envelope with a picture of a cat that she ‘bought’ for 6 stars (our play-money currency) from my little brother.  And Ahmad Ali gave mum a beautiful egg cup and a special Machin stamp(the 1840 Anniversary Machins) with pictures of both Queen Elizabeth as in other Machin stamps and Queen Victoria as in Penny Black.

That night,we had pizzas from Domino’s Pizza for our dinner. Everyone love Domino’s Pizza and we celebrated most of our birthdays with them. It was only last month when we had pizza for my little brother’s birthday!

Uncle Awang Goneng’s latest book, A Map of Trengganu is finally out! This morning, I went out with my father to pick up the books from the country distributor and helped dad with our first batch of deliveries.

Anxious to be one of the first people to read it, I quickly picked up a copy from the box as soon as we reached home. Soon, I was too engrossed with the book that when my mother called me to help her with the chores, she was shocked to hear me laughing alone. At that very moment, I was reading the part when Awang Goneng ‘took a Law degree “from the Academic Registrar’s office one night when the door was left open”.

‘A Map of Trengganu’ proved to be as beautiful and fun as its prequel ‘Growing Up In Trengganu’. Since the book had just arrived from Singapore, (as for today) there is a big chance that you may not be able to get them from the bookshops in Malaysia yet. But you can calm those restless, fluttering butterflies in your stomach by ordering them straight from ‘The Pizzaman’ (who happens to be my father 🙂 )!

You can contact him by email (akarimomar@yahoo.com) or call/SMS 019-319-9788. You can check out his blog post on the book here!. And what’s more? He can send it straight to your doorsteps (which is why he was called ‘The Pizzaman’). Do not miss the chance and get your copy NOW

Anyway, right after I’ve published this post, I’ll be going back to my room where I shall not be disturbed (nor shall I scare mum with my constant outburst) and continue reading the book 🙂