A few days ago, mum cooked a very delicious ‘ttupak sotong’  for iftar. ‘Ttuppak sutong or ‘ketupat sotong’ in standardspeak is squids stuffed with steamed glutinous rice in coconut milk curry sauce. The picture of the gleaming white squids floating in a white sea of  coconut milk is as appealing to the eyes as it is to the palate. And the delightful fragrant of the ‘ttupak sotong’ brewing on the stove really made me yearning to have a sip of that creamy white curry sauce right at that very moment. 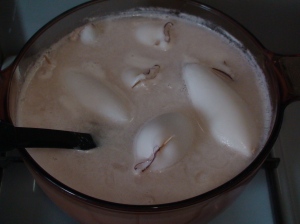 yummy ttupak sutongThis Terengganu specialty is normally a home cooked treat. In fact my family and I have never come across any eatery serving or selling ‘ttupak sotong’ each time we were back in Kuala Terengganu. But again I might be wrong for we do not live there. Anyway dad said that he used to buy ‘ttupak sotong’ during his schooling years. May be nowadays it is only a special home cooked treat.

Everyone in my family loves the ‘ttupak sotong’ except my dear sister Aeshah. Just imagine the delightful taste of tender squid stuffed with soft steamed glutinous rice in an aromatic, delicious and creamy coconut milk curry sauce… This is the taste that my 5 years old little (blogging) brother Ahmad Ali (refer to ‘Ahmad Ali’) would described as mmmmm… as he always did in his blog* when he wrote about the taste of the food that he loves.

To make ‘ttupak sotong’ we first need to buy a lot of fresh ‘sutong’ or squids of a medium size . Try to look for the ones with egg for a tastier ‘ttuppak sutong’ .Next, steam the glutinous rice with some coconut milk. While waiting for the glutinous rice to be cooked, clean the squids and take out the outer layer skin leaving them gleaming white. Then, stuff the squids with the steamed glutinous rice and secure the open end using toothpicks. In a big pot (if cooking a lot of ‘ttupak sutong’!), heat the coconut milk or low fat milk. Add sliced shallots, ginger and some fenugreek and continue cooking on a medium heat. Next add the stuffed squids. Do not overcook or the squids will end up too chewy. The curry sauce should has the right balance of salt, sugar and the creamy taste of either coconut milk or low fat milk. Actually this is the most tricky part as one has to be   very familiar with the taste of the original ‘ttupak sutong’ to enable them to get it right and be able to produce a really delicious ‘ttupak sutong’.

It would be nice if I can have my ‘ttupak sutong’ more often but mum will only cook ‘ttupak sutong’ if she can get squids heavy with eggs which is nenek’s (my grandma) important secret in cooking her finger licking good ‘ttuppak sutong’. Don’t worry if there are left overs- they taste as good after a few day in the refrigerator or store them in the freezer if they are to be eaten much later. The squids’ heads can be fried or cooked in other recipeas prefered.

I love ‘pulok’ or pulut (glutinous rice) and so do my siblings. Among my favourite pulok dishes are ‘pulok gao nyo‘, ‘ttupak sutong‘ and ‘pulok lepa‘.

Unlike ‘pulok gao nyo‘ which is easy to be prepared, preparing ‘ttupak sutong‘ is rather tedious. First mum has to clean the cuttlefish or squid. Then the glutinous rice has to be cooked with coconut milk. Next, the cooked glutinous rice has to be stuffed into the squids. This process looks really fun and I always wanted to try stuffing the squids… only that mum never let me try because if this is not done properly, the ‘pulok‘ will spill out when the squids are cooked in coconut milk. ‘Ttupak sutong‘ is very, very delicious and mum has to cook a lot of ‘ttupak sutong‘ because it is everybody’s favourite. Nenek (my grandmother) serves ‘ttupak sutong‘ for tea but we prefer to have them for either lunch or dinner (better still to have it for both).

‘Pulok lepa‘ is glutinous rice stuffed with a fish based filling called ‘iti‘ in Trengganuspeak (or inti in standard speak). It will then be wrapped in banana leaf and grilled. According to nenek the process of wrapping is very important to ensure that the ‘pulok lepa‘ will be nicely intact when unwrapped. If not, it will ‘rela‘ and I don’t think anybody would fancy eating a ‘pulok lepa hok rela‘. Since mum do not make ‘pulok lepa‘, we have to count on nenek to bring them from Kuala Terengganu. I like the ones with generous amounts of fillings or in Trengganuspeak we say ‘hok iti banyok‘. Mum said that she likes to eat them with black coffee or ‘kopi ‘o’ in Trengganuspeak.

There are lots of other tasty dishes using ‘pulok‘ in Terengganu cuisine such as ‘nasik kunyit‘, ‘nasik dagang‘,’ ttupak daung palah‘ and ‘lemang‘. Glutinous rice is also used in dessert such as ‘tok aji srebang‘, ‘asang gupa‘, ‘bronok‘ and ‘pulok duriang‘. Some people believe that eating too much ‘pulok‘ will make us lazy and sleepy but that do not stop me from enjoying my ‘pulok‘ dishes!