Just days ago, Ngeh Koo Ham, Perak DAP chairman had humiliated the Muslims by asking if the Muslims (are) wasting too much time and energy on the protests against the disgraceful  film, ‘Innocence of Muslims’ in respond to UMNO Youth YB Khairy Jamaluddin’s call for a peaceful protest over the film in Kuala Lumpur. The film which was directed by Nakoula Basseley Nakoula (or his pseudonym Sam Bacile) insults the Prophet Muhammad, portraying him as a womanizer, child abuser and a fool, and Islam as a whole.

As you may have recalled, not only did he make such an insulting statement but when first criticized, he refused to apologise saying that, “There is no doubt that I condemn the video but my tweet was a question and not a statement as some have claimed, belittled Islam.”

If the statement isn’t belittling, all that I can say is that it certainly humiliates. The statement had obviously portrayed the Malaysian Muslims to be ‘over-sensitive’ over the film by holding out peaceful protests. But if protests are simply a waste of time, why are the opposition parties so obsessed with the ‘Bersih’ and other demonstrations?

On the 26th of September 2012, Ngeh once again insulted the Muslims by tweeting ‘Pertama kali saya dengar minum kopi mesti ada label halal. Manusia jgn tambah tambah syarat,membebankan. Tuhan membebaskan.’ (This is the first time I’ve heard that coffee needs a halal label. Humans shouldn’t make up more rules, it’s burdening. God liberates) when the vice chairman of the Unit Pidato Pemuda BN asked him why does his white coffee comes without halal certification. Not just that, when the person corrected him, saying that coffee too needs to be certificated as halal, Ngeh retorted by tweeting, “Tuhan tak kata bagitu. Lain negara tak ada sijil halal bagaimana ? Minum kopi haram ?” (God did not say so. How is it for countries without halal certifications? Would drinking coffee be haram?)” 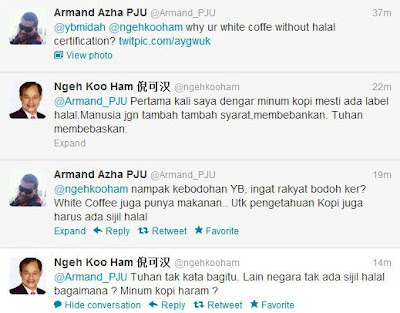 Ngeh chose to ignore the fact given by Armand Azha PJU that the Old Town White Coffee they were referring to also serves food apart from coffee. Ngeh may spin the story but the Quran had clearly stated that Muslims should only eat foods which are ‘halal’. The ‘halal certificate’ acts as a guarantee for the Muslims to consume food which have been examined to be free of any haram substances, as I had mentioned in my previous post ‘Halal Labeling’. When a product had not been proven as ‘halal’ through the certificate issued by a trusted body, there is a possibility that the food may contain a certain amount of non-halal substance. So, the official halal logo will assists the Muslim consumers in buying goods that are compliance to the halal criteria.

I remember that See’s Candies of California only took a few days to respond to my father’s email and they gave him a very detailed account of their chocolate making process as well as the nature of the ingredients used. See’s Candies has a batch of products which were made by only plant-based products and were manufactured separately to protect it from being contaminated by the animal-based product. And they answered the email respectfully, very much unlike what Ngeh said in his tweet despite the fact that my father is a foreigner and Muslims are only a minority in the United States. See’s Candies that produces very delicious chocolates is not owned by a Muslim but although being unlike the DAP leaders who need the votes from the Malaysian Muslims, See’s Candies still care to respect the rights of its Muslim customers.

It is funny to think of how a leader like Ngeh, who lives in a Muslim-majority country does not understand nor respect the importance of halal labelling. Not only that but Ngeh dares to challenge what is right in according to Islam. And it is even fishier when PAS had always claimed that the DAP leaders understand Islam even better than the UMNO leaders do.

I firmly believe that products and restaurants such as the Old Town White Coffee must be avoided by Muslims for three reasons, one is that we have no confirmation on the halal status, secondly is that we as Muslims we need to fight for our rights to proclaim the verification of a halal product and last is to make sure that we only support the companies (either owned by Muslim or non-Muslim) that support and understand our needs and requirements as a Muslim consumer. We should support companies such as Carrefour – who even employs an ustaz or a religious officer for the purpose of controlling the verification of their halal products even for imported goods even despite the fact that the company is not owned by a Muslim. It is our duty to make sure that the foods and drinks that we consume will be good for us.

Muslims should make sure that they only consume halal food. In Food Facts, I had voiced out my concern regarding the free use of illegal halal labels on food products in Malaysia. The worst is, some of those products are actually questionable in their halal status.

Living in a multiracial country, Muslim consumers must be knowledgeable and well informed on this matter. Since the halal labeling is considered only as a ‘ticket’ for a big and profitable business by some, consumers must be smart as not to fall in their ‘traps’. The government and the islamic authorities must be more serious in handling this matter for halal food is actually a basic need for Muslim.

I guess honesty and responsibility are the keys in solving this problem. If those in halal food business are honest and responsible, we won’t be facing all these problems at all. But since some people are driven only by making money, we as the consumers have to fight for our rights.

I’m happy to say that not everybody are greedy, dishonest and irresponsible. There are people who took pride in being honest even though they are non-muslim. See’s Candies of California (whose candies and chocolates are truly delicious) only took a couple of days to respond to dad’s e-mail regarding the (very) detail of their chocolate making process and the nature the ingredients used. And an owner of a slaughter house in Australia  fired one of his Muslim staff after the guy was caught drunk on his night off. The reason given was – since the company slaughter halal meat, a person who do not follow the true teachings of Islam is no good for the job.

If only everybody are honest and responsible the world will be a better place for all of us; regardless our religions. But since cheating and taking advantages of others are the ways of lives for those who only value power and money – life is hard. Is it really important to have the halal label on food product? I guess the labei is important for Muslim as well as other labeling on food product; as long as halal label means the food is halal for Muslims.