We are really sad to see Atuk so weak and not as cheerful as Atuk used to be. It was only 3 months ago when Atuk was still very healthy and active.

Atuk, do you still remember the games we played when Aiman was a little girl? Atuk would be reading the newspapers while playing all sorts of games with me and suddenly he would declared ‘ Atuk menang!’ (atuk wins!), and I would scream ‘mana achi! (Unfair!) and would ran away sulking, but after a while came back asking Atuk to play another game. Atuk would never say no whenever Aiman asked Atuk to play; it doesn’t matter if Atuk doesn’t knows the rules of the game… in fact Atuk never bothers about the rules! We played congkak, chess, checkers and a lot more…

Whenever Atuk came for a visit, Atuk buys roti canai and lontong from a restaurant nearby for breakfast. On the last day, before atuk would be going home to Kuala Terengganu, Atuk would buy extra roti canai and mama would heat them up for our breakfast with cold sardine straight from the fridge. When we finished the roti canai, we would be asking Atuk to come back to KL for more roti canai!

Today, Atuk hardly speaks to Aiman. To make it worst, Aiman do not know how and what to say to Atuk. Aiman wish to make Atuk happy and hear the laughter when Atuk tease us. Atuk, please get better. We miss Atuk’s jokes and funny ‘magic’ tricks. We love you very much, Atuk! 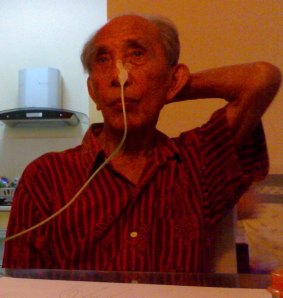 Note: My Grandfather is a wonderful man. He studied in Egypt and England; and worked (as the then Prime Minister’s personal representative to UNHCR) in Europe mainly in London, Geneva and Vienna. Apart from Bahasa Malaysia (Malay Language) and English, he speaks Arabic and German and a little Japanese. I’m so proud of him and I hope to be able to write about him one day.