I came back to Kuala Lumpur last Tuesday after a two weeks Eid holidays in Kuala Terengganu. I had a wonderful holiday, doing lots of interesting and even ‘adventurous’ activities; among which were ‘Bedil Huntings‘.

On the 5th day of Syawal, my father drove my mum, sisters (Aeshah and Anisah) and brother (Ahmad Ali) to Bukit Pak Apil. All of us were provided with a camera each to try and snap the best bedil photos.

We arrived at the site rather early and since the view from the top of the hill was breathtaking, I spend the time snapping beautiful photos of it. After a while a ‘bedil’ contractor staff arrived accompanied by a policeman. Since ‘bedil’ is explosive, a policeman is needed to escort the contractor and to supervise the operation of ‘bedil’ shooting.

The contractor staff walking up to the site with a policeman escorting him.

The kind policeman told us about the safety procedures during ‘bedil’ shootings and then directed us to the safe site (just in case the ‘bedil’ did not shoot high up in the air as it was supposed to be; but instead explodes on the ground). He also told us that if that happens the flying debris from the explosion could reach as far as 100m away. There were a few unfortunate accidents in the ‘bedil’ shooting history in Kuala Terengganu. So we went to the ‘safe site’ and waited there excitedly.

The contractor staff walking up to the 'bedil shooting base'.

A few minutes to Maghrib, all of us were busy focusing our cameras towards the blue sky, trying to guess the right location of the ‘bedil’. We were really excited. Then, there was a thunderous ‘explosion’ as the bedil shot up to the sky. It was an amazing sight of a beautiful fiery light shooting up in the dusk sky. I managed to snap a photo of it and so did Aeshah. 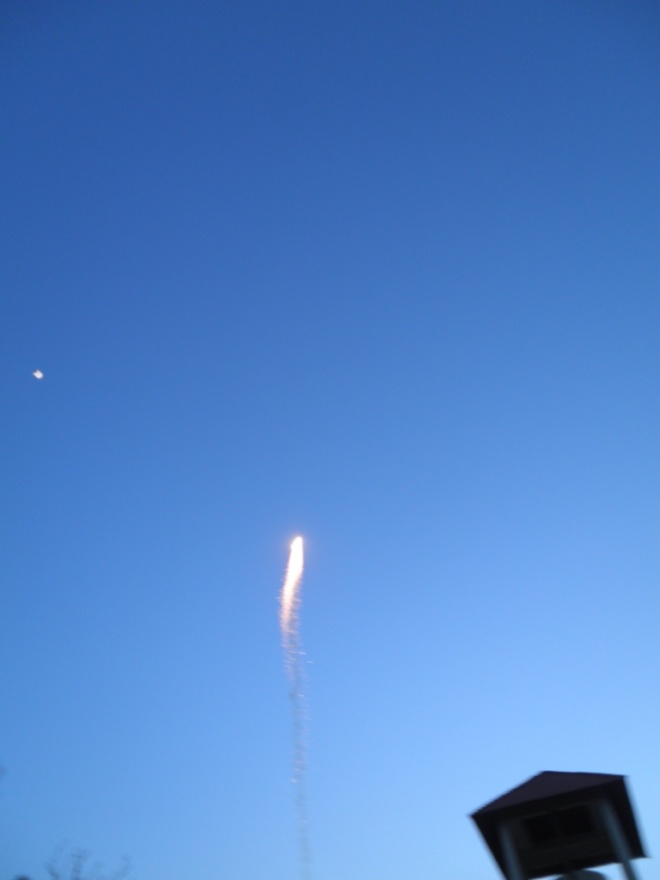 The beautiful fiery light shot up in the dusk sky

The fire shot up so high up and went directly above our heads as it exploded into a huge firework display like a gigantic colourful umbrella stretching above us, with an amazing display of colourul lights ‘raining’ down as it faded and vanished into the darkening sky. I was too amazed by its size and beauty and was taken by surprise that I forgot to click on the shutter release. So I missed the shot of the climax! It was just like a dream; it all happened as fast as it ended and left us glaring into the sky speechlessly. 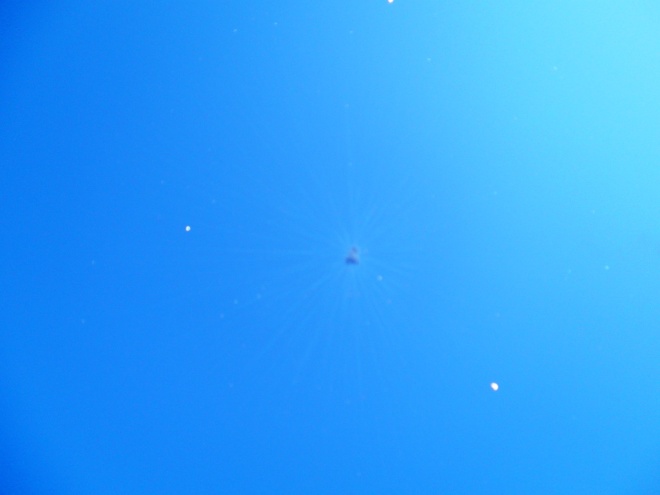 Although I missed the shot of the climax, I managed to get this: the smoky remain

We went back to the Bukit Pak Apil for the next two days until the 7th day of Eid which mark the last bedil shooting of this Shawal. On the second day, the only shot I managed to get was a cloud of smoke after the fireworks display ended and on the last day, I managed to snap a photo of the fireworks before it fully expanded. Anyway, during those ‘bedil’ huntings my dad and my little brother managed to snap beautiful photos of blooming fireworks at its peak.

It was an exciting and adventurous experience for all of us. It was something that when the accuracy of the location and timing is vitally important. Just a split seconds makes the whole difference; we may ended up missing the action and snapping photos of fading smoke in the darkening sky instead of an amazing colourful display of lights in the evening sky!

It was a nice experience to go bedil hunting and I hope that we could go back up there again next year to hunt for more bedil photos.

Starting my own blog taught me lots of new things. For instance during our journey back to Kuala Terengganu, I was more alert to the surroundings – taking notes and photos for my blog. Normally I would just sleep, watching the VCDs or lost in my own world.

There are lots of beautiful old traditional houses by the main road in Kemaman. I took photos of them wondering how much longer they would be standing there. I guess one day those houses will be replaced by modern shop houses or other buildings considering their strategic locations. I can’t blame their owners for destroying our heritage for the old houses are of no commercial value compared to the modern buildings.

We passed some beautiful rivers and scenic beaches. Born and grew up in Kuala Lumpur, far away from the beach my siblings and I are always excited to see beaches. How I wish that we can stop by at those beautiful beaches…

‘Amlr’ mentioned about a Pasar Ramadhan in Geliga where one can buy ‘ttupak sutong’ (please refer to ‘Ttupak Sutong’). Passing Geliga, I tried to look for the location but failed to locate the Pasar Ramadhan. Maybe it is not located near the main roads to Kuala Terengganu or maybe we were there too early as we passed Geliga at about 1p.m.

Reaching the Petronas Complex, my little 5 years old blogging brother, Ahmad Ali excitedly searched for the fire at the refinery complex. He just love counting them and searching for the biggest fire. He too was searching for things to write in his blog (which he posted on 27th Sept, entittled ‘Things I saw on the way to Terengganu’). He kept telling us that he wish to own  a real camera or a real phone with a camera so that he can take lots of photos of the things he likes by himself.

I passed the ‘Keda Lepeng’ in Rusila – another place that sells ‘ttupak sutong’ according to ‘changgeh’ (please refer to ‘Ttupak Sutong – 1st comment). And yes, I can see the words ‘ttupak sutong’ written big and clear on their banner. The place looked empty. I guess they are still closed as most restaurants starts operating their business late in the afternoon during Ramadhan.

Breaking fast (iftar) in Kuala Terengganu is exciting. I waited for the sound of the ‘bedil’ (please refer to ‘Special Ramadhan Treats from Terengganu’) to mark the time for iftar. And finally I ate the delicious ‘ttupak pulok‘ with ‘samba daging’/serunding daging’ or beef floss for iftar today. How I missed the delicious ‘ttupak pulok’ (as I wrote in ‘Ttupak Pulok‘). Mum enjoyed her ‘ttupak pulok’ with ‘ayang golek’. And talking about ‘ayang golek’ reminds me of the old fashioned ‘ayang golek’ on sugar cane sticks (as mentioned by ‘Pok Cik Luckganu’ in ‘Special Ramadhan Treats from Terengganu’). How I wish I can try them…

Note: Where do they fire the bedil? I’ll be writing about it in my next post, Insya Allah.