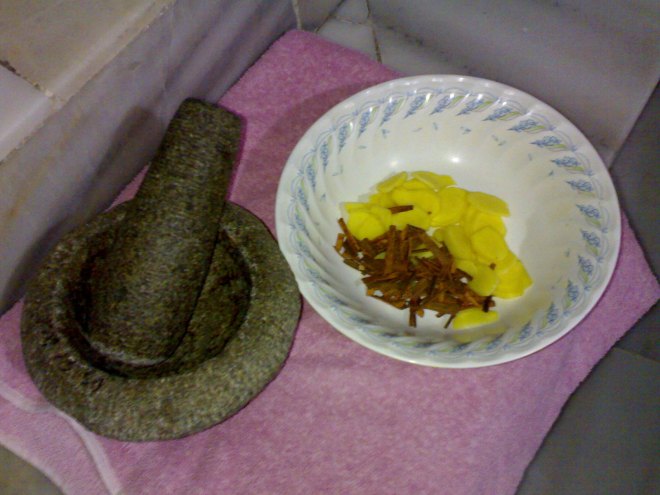 The yet to be crushed ginger and cinnamon. On the left is the traditional Malaysian pestle and mortar

There is nothing better than indulging myself to a warm cup of ginger and cinnamon tea after a long day of hard work. Only a whiff of the tea is enough to make me craving for a sip of this wonderful and aromatic tea. The aromatic and spicy flavour of ginger together with the sweet and warm taste of cinnamon blends wonderfully with that unique aroma of tea resulting a drink that is so flavourful and heavenly delicious. And the best part is, not only that the tea is so tasty but it is also loaded with tremendous medicinal benefits!

Cinnamon is known for its ability to improve blood circulation and the effectiveness of insulin which plays a role in lowering blood sugar and bad cholesterol level; while antiviral, anti-fungal, antibacterial, anti-clotting and anti-nausea are some of the many medicinal properties of ginger. And black tea has a good amount of antioxidant too! For a ‘spicier’ taste, I sometimes add some cloves which is an excellent source of manganese to the brew.

The result of the 'crushing' process.

Every once in a while (since I am not that eager to crush the spices), I would prepare the ginger and cinnamon tea for both my mom and I. The process is not that hard actually, but I find grinding cinnamon quite tiring especially to avoid the pieces of cinnamon from ‘jumping’ all over the kitchen. While mom loves her tea the way it is, I prefer mine with a richer taste of milk. Since ginger and cinnamon tea has a unique blend of taste, it goes best without sugar which is all the better for your health!

6 thoughts on “Ginger and Cinnamon Tea”