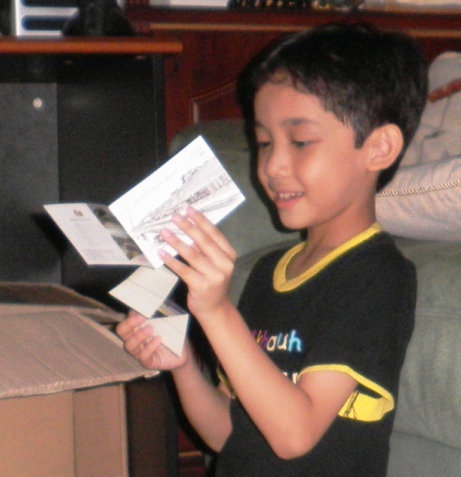 Coincidentally, he also started his silat (Malay martial art) class on his birthday. He had been waiting for years for the day when he could join my sisters and I to our silat class. He amazed our instructor by being able to do a lot of the simple moves (since Ahmad had been ‘practicing’ with his sisters at home).

Back at home, dad brought him an envelope addressed to him from Abang Muhammad (the letter actually arrived the day before but our mail-girl, Anisah, had forgotten to pick up the Saturday’s mail). When he read the sender’s name and address, Ahmad didn’t believe that it was from Abang Muhammad. He insisted that my dad was teasing him until he opened the birthday card and saw Abang Muhammad’s signature. He was speechless with pleasure and surprise at the thought of Abang Muhammad sending him a birthday gift all the way from Chicago. Ahmad was also delighted with the mint stamps that Abang Muhammad sent him. 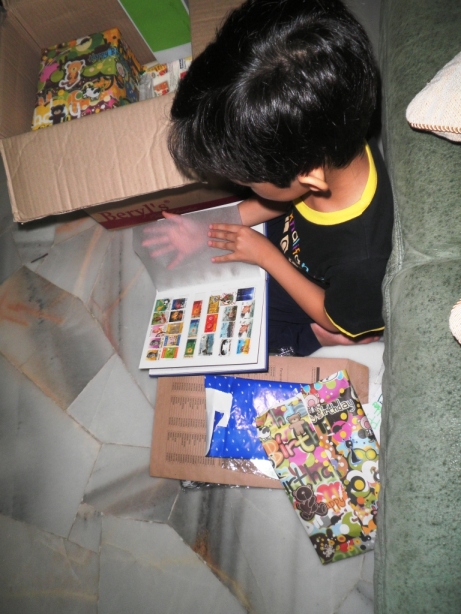 A stamp album from mum

Unwrapping gifts had always been the main part of our birthday celebrations. It was fun to look at him shaking his presents and peeking into the openings of the wrappers as he tried to guess what was inside and whom it was from. It is also very rewarding to look at his facial expression when he opened his gifts. His joy and delight was painted all over his face. Amazingly, his best birthday present was a pack of menthol flavoured sunflower seeds from mum, followed up by a DIY model airplane (from me) and a﻿ ‘Maisto‘ Assembly Line Enzo Ferrari from my dad which tied in 2nd place. A stamp album from my mum with 132 stamps inside for him to start his stamp collection was chosen as Ahmad’s 3rd best birthday present followed by the mint stamps from Abang Muhammad. However, Abang Muhammad was very lucky because Ahmad chose Abang Muhammad’s card as his best.

He had a beautiful birthday e-card with a cute teddy bear from Aunty Selina who lives in Maryland, USA. That night, we had pizza from Domino’s Pizza for his birthday dinner. And Ahmad (who had been a fussy eater) finished 3 enormous slices of the extra large sized pizza!